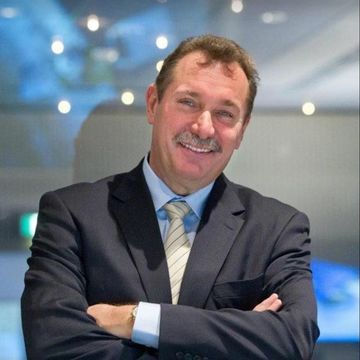 Born in Toronto and raised in Canada, the United States and Germany, Frank Danesy went on to complete a Bachelor of Science in Business Administration with a minor in Psychology (UoM) and master’s degrees in Business Administration (BU), Planetary Science (AMU) and Strategic Intelligence (AMU). His doctorate (Dr.rer.pol.) is in Business Administration with a focus on conflict management and leadership (FUB). Dr. Danesy began his career with the Armed Forces. His later career milestones included appointments with British Airways, the Free University of Berlin, the European School of Management (ESCP) and the European Space Agency (ESA). He has spent most of his career in general management and human resources functions. He was the Head of Recruitment and Training at the European Space Research and Technology Centre (ESTEC) in the Netherlands and Head of the Human Resources Division at the European Space Operations Centre (ESOC) in Germany. His responsibilities have included the recruitment of more than 1,500 highly qualified engineers, scientists and professional managers for a broad range of space technologies, projects and missions at ESA over a period of 20 years. He was also responsible for all HRM processes related to ESA’s third astronaut selection campaign in 2008/2009. In 2013, he transitioned to the general management role of Head of Business Unit Control for ESA’s Directorate of Human Spaceflight and Operations where he has been responsible for managing considerable financial and human resources. Frank Danesy is an avid land- and sea-plane pilot with a commercial pilot license and instrument rating. In his leisure time he enjoys sports and playing the guitar (plugged and unplugged).