Our research results are relevant for both entrepreneurial and political decision-makers. Our practical research approach is reflected in Professor Spengel's numerous contributions and the quotations of our research projects in business magazines, newspapers and other media. Current topics are the US tax reform, cum-ex/cum-cum transactions and the taxation of the digitalising economy.

Below you will find an overview of current articles in the press. 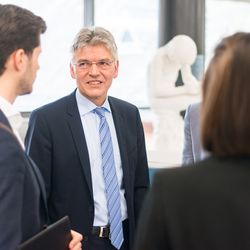 “This is the biggest tax robbery in the European history.”

In collaboration with the research network CORRECTIV and an association of international media, Professor Spengel and his team have calculated the potential tax damage caused by Cum-Cum and Cum-Ex ADR transactions. The documentation and figures can be found below.

For further background on the research conducted by CORRECTIV and the international media partners, please see here or this informative piece by STRG_F.

On 02/24/2021, the FISC Subcommittee on Tax Matters of the European Parliament addressed the Cum-Ex/Cum-Cum scandal in a public hearing, to which Prof. Dr. Spengel was invited as an expert.

Prof. Dr. Christoph Spengel was invited as an expert by the German parliament's committee of enquiry concernig the tax issues of Cum-Ex Share deals.

On Monday 26 November 2018, Prof. Dr. Christoph Spengel was invited by the European Parliament as an expert to a public hearing on the topic of “Cum-Ex scandal: financial crime and the loopholes in the current legal framework”

On Wednesday 09 September 2020, Prof. Dr. Christoph Spengel was invited as an expert to a public hearing on the consequences from the Cum/Ex-scandal at the Financial Committee of the German Parliament.

- Short opinion from 05 December 2016, on the statement of the German Ministry Finance from 11 November 2016 (in German)

- Opinion from 26 November 2018, for the public hearing on the Cum-Ex scandal at the European Parliament (in German)

- Opinion from 04 September 2020, for the public hearing on the consequences from the Cum/Ex scandal at the Financial Committee of the German Parliament (in German)

On 8 December, Prof. Dr. Christoph Spengel, together with Theresa Bührle and Leonie Fischer, was awarded the ZEW Förderkreis Prize for the best economic policy consulting project 2021/2022 for the study “Immediate Tax Programme and Approaches to Increase Entrepreneurial Investment in the Context of Corona Crisis in Germany” on behalf of the Friedrich Naumann Foundation for Freedom. The award ceremony took place within the framework of the ZEW series “Economic Policy at First Hand”. Ralph Rheinboldt congratulated the prize winners on behalf of the ZEW Förderkreis.

The study examines how efficient and targeted the income tax measures were in supporting German firms affected by the Corona crisis. The results show that the Corona tax aids in Germany were altogether too timid to cushion the consequences of the crisis. Thus, the measures in their form at the time mainly relieved large companies, while small companies and start-ups hardly benefited. The extension of the loss carryback period to two years, which was called for in the study, has now been implemented.

The transfer of knowledge as well as the dialogue between science and practice on this highly topical issue was not only promoted by appropriate media coverage, but also facilitated interesting discussions within the framework of the formats “Leibniz in the Bundestag” and “Book a Scientist”. Synergies from the discussion of tax legislation in the crisis were additionally used for a subsequent scientific project, which has since been published in an international journal, the British Tax Review.

On October 08th 2021, Professor Dr. Christoph Spengel participated as speaker at the public hearing of the European Economic and Social Committee on  the role of corporate taxes in corporate governance and the debt-equity bias. This is the second time this year that Prof. Spengel was invited by the EESC as expert.

On May 26th 2021, Prof. Dr. Christoph Spengel was invited as speaker to the virtual joint public debate of the European Economic and Social Committee and the IMF on “Taxing multinationals in Europe”.

Here you will find a selection of press photos of Professor Spengel.

to gallery
In order to improve performance and enhance the user experience for the visitors to our website, we use cookies and store anonymous usage data. For more information please read our privacy policy.
Allow
Reject